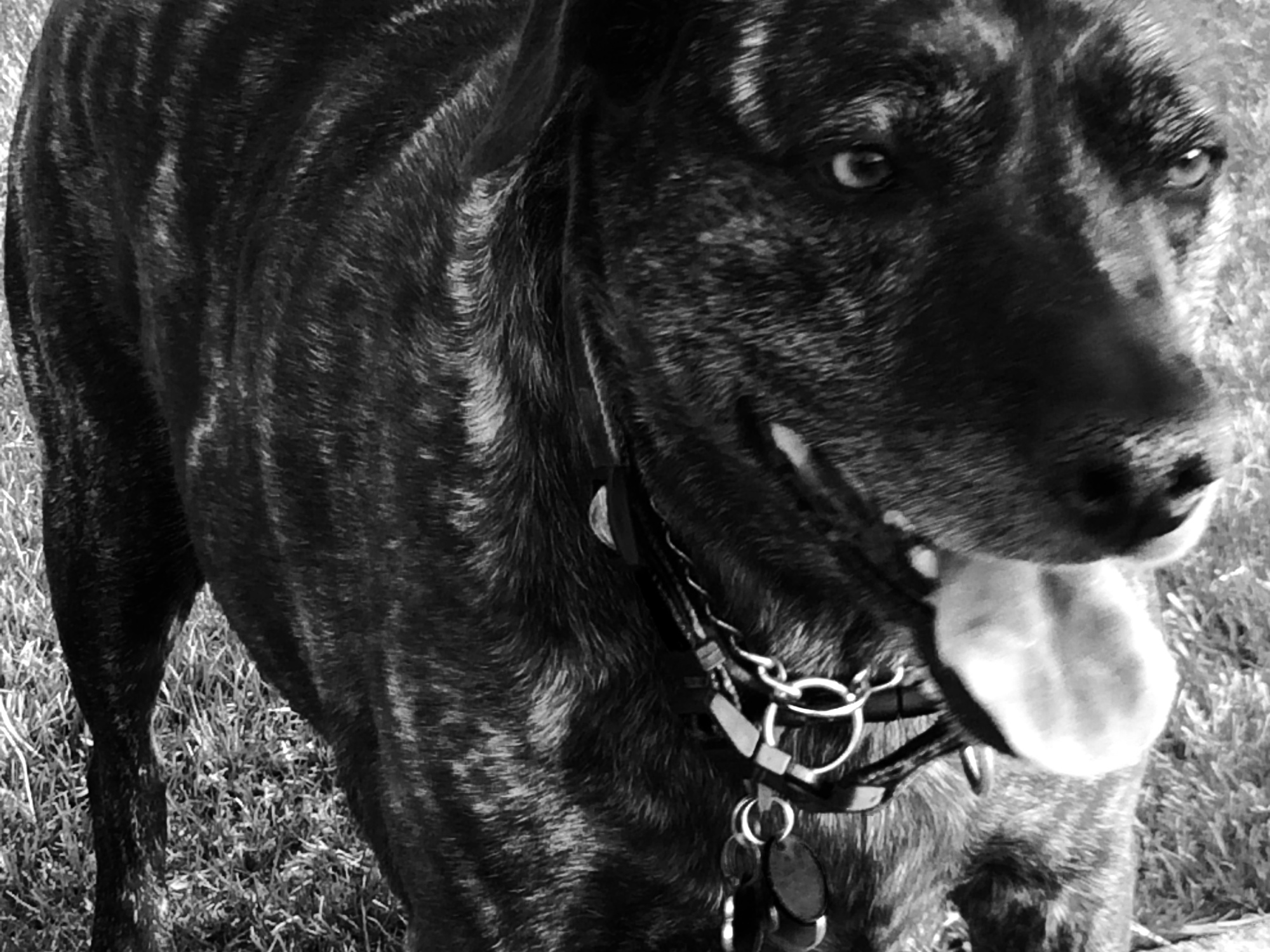 He was just a dog, but to me he was everything.  If you aren’t a dog person, you likely won’t understand this post, but either way, putting My Boy, Guinn down last summer was an incredibly beautiful traumatic heartbreak.  It’s been over six months since I said goodbye to my companion of fifteen years and while I still mourn him daily, I’m beyond thankful for the blessings he gave me.  He was a soulful protector, a jogging partner, a cancer sniffer, a therapist, a comedian, a babysitter, a mentor, a study partner, a snoring machine, a grand-dog, and a brother.  Needless to say, he wasn’t just a dog.  I can honestly admit that I learned more about life living with that four-legged, brindle-coated, spotted tongued, lab mixed canine than I did in the twenty-eight previous years I had without him.  Obviously, I never heard him actually speak, but his authentic eyes and truthfully wise face always told me everything I needed to know.

Guinn (short for Guinness) went everywhere with me.  From quick grocery store runs, to family dinners, to work (he spent many hours in my classroom patiently listening to struggling students read to him), to road trips, to my parent’s house, to coffee shops, to baseball practices, and even hospitals while visiting sick family members.  While he was my dog, Guinn belonged to everyone and never feared a new environment.  That’s quite the difference from where he started in the world being when we first met, he was locked in a kennel on the bottom row of a cramped room with about ten other dogs living in a last chance shelter.  I was told he was surrendered to animal control after reports of abuse and neglect by his previous owner, but other than that, there wasn’t much of a history on him.  After spending three months at the regular pound without generating any interest, he was transferred over with the hope of finding his forever home. Guinn was the only dog that didn’t bark or howl when I walked into the room. To be honest, I spent the majority of my visit looking at other dogs that seemed to have more personality, but my eyes and gut kept going back to that bottom corner kennel. I took Guinn for a quick walk and knew instantly we were going to end up a packaged deal.  After signing paperwork to only be a foster parent, Guinn and I left the facility and went over to my grandma’s house who happened to live right across the street.  Guinn hopped out of the car and sprinted inside like he’d been there a hundred times before.  He ran all over with a huge smile and even bigger glow.  He jumped on couches, knocked over plants, skidded across the wood floors, charged up and down the stairs, slurped from a big bowl of water and finally landed sprawled out across my lap with his tongue hanging out.  With an expression of relief and pure bliss, he fell asleep on the front seat of my car as we headed home. Carrying him into the house and onto his bed, Guinn was exhausted by freedom and ready to enjoy the perks of his new forever place.

Over the next few months, he backtracked a bit and acted out a few puppy instincts, but I really didn’t mind.  In fact, I found most of what he did comically.  Everyone did.  I rarely had to discipline Guinn because when he did something wrong he often went and hid under my bed on his own merit as if to say, “Yep, busted. I admit it. You got me.” He chewed the corner of my couch, nibbled on my shoe collection, ate a copy of The Da Vinci Code, managed to digest a portion of an old VHS tape and even gnawed an innocent squirrel he “hunted” in the backyard, but other than that, he was all smiles all day and every day.   We spent a lot of time running together and going for long car rides.   Simply put, our personalities matched perfectly as he was beginning to heal my wounds as much as I like to think I was healing his first-year fears of life.  It was pretty clear this fostering thing was going to be a permanent and I wouldn’t have wanted it any other way.

While I’m still convinced Guinn was the smartest dog around (every dog owner thinks that of their dog), about a year into our bonding, he showcased his smarts even more by literally sniffing out cancer that was forming in my mom’s neck. She hadn’t been feeling well for a few weeks and whenever I took Guinn over to her house, when it was time to leave, by routine, he would get his to-go treats and kiss my mom goodbye.  After months of doing this without any issues or change (he was such a creature of habit), one summer night, he bypassed his treats and jumped up on my mom nudging and softly nipping at her neck.  I initially pulled him down and didn’t think much of it, but he was determined to go back for more.  This continued for a few minutes and after I finally picked him up and carried him out to the car, Guinn broke free and ran back into the house determined to get one more nudge and sniff. After discussing his weird behavior later that night with my mom on the phone, she told me she felt some lumps and bumps in her neck area and was contemplating getting checked out by a doctor.  One week to the day Guinn fixated on my mom’s neck, she was diagnosed with Hodgkin’s Lymphoma.  The doctors told her that if she would have waited much longer to be seen the outcome could and likely would have been significantly different.  Mom went on to beat Hodgkin’s and to this day, my entire family attributes that to Guinn and his bionic cancer sniffing nose.  He was always protective of his pack so much so that when my dad was under hospice care and on his deathbed,  Guinn laid at his bedside for five days straight both safeguarding the room but also honoring his grandpa.  Guinn loved both of his “grandparents” and especially loved the attention and treats they provided.  He spent many full days keeping my mom company, inhaling any food crumbs that landed on the floor, taking naps and licking my dad’s salty arms.  He knew his people and mourned when one was ill or lay dying.  He had an uncanny way of calming me through so many of life’s difficult emotional challenges, especially my dad’s passing.  He always knew when to get me to go for a walk and enjoy the sunshine again, as well as when to just lay at my feet and comfort me through the pain.

An unbelievable master at adapting to change, Guinn always seemed up for any new condition.  During the last year of his life, I met, fell for, and eventually moved in with my soon to be wife, Emilee.  A dog lover herself, she accepted Guinn right from the beginning and loved him as her own (as he did her right back).  I believe Guinn sensed my happiness and in turn, was happy himself.  Once again, Guinn had a new home and a new atmosphere, but he was still happy-go-lucky nonetheless.  That said, he was also thrown into a new role of big brother, as Emilee had a two-year-old lab named Kayla.  At first, the two dogs seemed to tolerate each other with the understanding that this was a temporary fix and one would eventually be moving out.  While days turned to weeks and weeks turned to months, their tolerance for each other grew into a true sibling bond.  The young pup shadowed her wise old brother everywhere learning from him and relentlessly getting him to play with her which for the most part, he obliged.  When his body was tired, Kayla let Guinn rest only to restart the whole process over again usually every hour on the hour.  After a few months, they were inseparable and never lonely.  When Guinn started to grow weaker as his age and own terminal diagnoses became a reality, Kayla seemed to understand and became incredibly affectionate with her brother as if to say thank you for the teachings you’ve given me.  It took months after Guinn died for Kayla’s personality to get back to normal, as she mourned like the rest of us.  I will never be able to thank Emilee and Kayla enough for the love and compassion they both gave to Guinn, especially in his final weeks. While we knew his death was inevitable and coming on fast, Guinn continued to fight like hell to stay with us in making our family complete.  But he was hurting and it was time for Emilee and me to make an absolute hellish decision.  While he died in my arms with a smile on his face and a happy heart, I still miss him like crazy and wish there was more I could have done for him while he was sick.

In short, Guinn never took a day off.  He never whimpered, complained, pouted or mopped around when things didn’t go his way.  Even when I took a job overseas for two years that forced me to leave him with my mom (I came back stateside every few months, but leaving Guinn behind was beyond gut-wrenching and painful), he always greeted me with a smile and happy dance the minute I walked in the door as if he was telling me that he understood the situation and while he missed me, he wanted me to know he was doing fine.  I’m convinced that it was in his DNA to get over things really quick, live in the moment, and see the good in all of life’s tribulations.  Given his beginnings, he had every reason to be angry, cynical, and bitter towards the world, especially with humans.

I am forever humbled and appreciative of the years I got to spend with My Boy, Guinn.  While there are days I still catch myself driving home thinking he’s alive and well, I take comfort in knowing he touched so many lives, was loved beyond belief, and that I’ll see him again one day.  Until then, I know he’s in a better place running pain-free liberated from the tumor that ultimately took him and once again licking his grandpa’s salty arms.

You are loved and missed, Guinn.  Thank you for making me better.  Always and forever.

“For 15 years, right by my side / From a single man to three kids and a wife / Friends come and go, but when it comes to Jake / There’s just some things that can’t be replaced.” Dierks Bentley